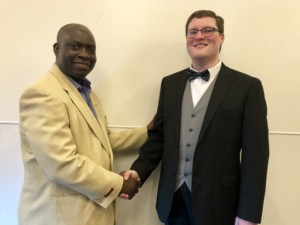 The new President of the NBNDP welcomes the new interim Leader

The New Brunswick New Democratic Party held a provincial council meeting on March 24, 2019. The deliberations of this council meeting included the selection of an interim leader. Mackenzie Thomason, candidate for New Maryland Sunbury in the 2018 election, was elected as the Interim Leader.

With a helping spirit and a strong work ethic, Mr. Thomason will be able to lead the NB NDP as it continues the process of rebuilding the party after a disappointing result in the last election.

Being 21 years old, he comes from a career in hospitality and customer service. His eagerness to help the party in any way he can with hands on tasks combined with his willingness to serve the Party as the Youth Representative on the Executive, is refreshing.

He brings a fresh perspective to the political table. As a Youth Member of the NB NDP, he believes that listening to New Brunswicker’s and working with experienced members within the NB NDP team fits well with his dedication and his goal of working for a better New Brunswick.